Greg Dember: Publisher, Editor, Contributor
Greg makes music, writes, philosophizes and does computery things in the Seattle area. He wants to experience what the world would be like if everybody stopped lying, like for real. Click here for Greg's non-Artocratic online stuff. Also, Greg wants everyone to know that he coined the word ironesty.
Story
Interview
Interview
Interview
Essay

Linda Ceriello: Editor, Contributor
Linda currently divides her time between Vashon Island, Washington and Houston, Texas, and studies comparative mysticism and popular culture. She is also a sometime artist and music maker, all pursuits that in some way engage her penchant for playfully but ruthlessly skewering unexamined assumptions.
Poem
Poem
Interview
Interview
CW

José Alberto de Hoyos Ramos: Contributor
José hails originally from Saltillo, Mexico.  Currently, he freelances within camera departments for television/film broadcast while also trying to manage his passion for photography. His work can be viewed at www.pepedehoyos.blogspot.com.
Essay

William L. Alton: Contributor
William L. Alton was born November 5, 1969 and started writing in the Eighties while incarcerated in a psychiatric prison. Since then his work has appeared in Main Channel Voices, World Audience and Breadcrumb Scabs among others. In 2010, he was nominated for a Pushcart Prize. He has published one book titled Heroes of Silence. His website can be found at http://billalton.wuargh.com. He earned his both BA and MFA in Creative Writing from Pacific University in Forest Grove, Oregon where he continues to live.
Poems

Holly Day: Contributor
Holly Day is a housewife and mother of two living in Minneapolis, Minnesota who teaches needlepoint classes for the Minneapolis school district and writing classes at The Loft Literary Center. Her poetry has recently appeared in Hawai’i Pacific Review, Slant, and The Tampa Review, and she is the 2011 recipient of the Sam Ragan Poetry Prize from Barton College. Her most recent published books are Walking Twin Cities and Notenlesen für Dummies Das Pocketbuch.
Poems

Holly DeWolf: Contributor
Holly is an illustrator, author, mentor, DIY'er, idea generator and big thinker, based in Eastern Canada. Holly grew up on a visual diet of Ed Emberley, comics, art, books, cartoons and music. Her first book was published in 2009 called Breaking Into Freelance Illustration: The Guide for Artists, Designers and Illustrators. Holly continues to work as a freelance illustrator and author with a second book on the way with big dreams of teaching in the future.
Video

Ricky Garni: Contributor
Ricky Garni is a writer and graphic designer living in North Carolina. He is presently condensing twelve manuscripts of poetry into one: 2% Butterscotch Ripple. His other titles include The Eternal Journals of Crispy Flotilla, Maybe Wavy, and My Fifteen Presidents.
Flashes

Howie Good: Contributor
Howie Good, a journalism professor at the State University of New York at New Paltz, is the author of 21 print and digital poetry chapbooks and the full-length collection of poetry, Lovesick, published in 2009 by PressAmericana. His second full-length collection, Heart With a Dirty Windshield, is forthcoming from BeWrite Books. He has been nominated multiple times for a Pushcart Prize and the Best of the Net anthology. With Dale Wisely, he is the co-founder of White Knuckle Press, http://www.whiteknucklepress.com.
Poem

Daniel Grandbois: Contributor
Daniel Grandbois is the author of Unlucky Lucky Days, a Believer Book Award Reader Survey Selection and Indie Next Notable Book, and the art novel The Hermaphrodite: An Hallucinated Memoir. His work appears in many journals and anthologies, including Conjunctions, Boulevard, Mississippi Review, and Fiction. Also a musician, Daniel plays in Slim Cessna's Auto Club, Tarantella, and Munly.
Flashes

Tresha Faye Haefner: Contributor
Tresha Faye Haefner is a native of California, and has lived in small, medium, and large towns up and down the state. Over the years she has been a professional clown, temporary tattoo artist, fundraiser, waitress, and teacher of English, Social Studies, Creative Writing, and even once, Sex-Ed. She holds a degree in modern literary studies from the University of California, Santa Cruz, and currently lives in the Bay Area. She drinks coffee at a cafe called Barefoot, and sometimes writes poems on the backs of her tax-returns. Her work can be found in Amarillo Bay, BloodLotus, Zygote in My Coffee, and Alien Sloth Sex.
Poem
Poem

Justin Hamm: Contributor
Originally from the flatlands of central Illinois, Justin now lives and writes in Missouri. He earned his MFA from Southern Illinois University Carbondale, and his work has appeared or is forthcoming in a number of publications, including Cream City Review, New York Quarterly, Spoon River Poetry Review, Red Rock Review, and The Brooklyn Review. He recently completed his first collection of poems, Illinois, My Apologies, for which he’s currently seeking a publisher. You can read more about Justin and his work at his website: NoisefForItsOwnsake.
Poem
Spoken Word 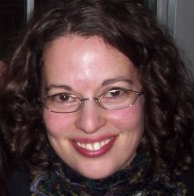 Jessica Kane: Contributor
Most recently, Jessica Kane wrote and directed a play called, Two Sizes Too Small, which was produced as part of the New York International Fringe Festival and was rated the #1 most popular play of the festival according to NYTheatre.com. Jessica is also the author of Straining to Parallel Park in an Empty Field, an audio collection of memoirettes which chronicle her daily adventures over the course of a year. These and other projects, such as songs and sculptures, can be seen on her website, www.jessicakane.com. Jessica lives in the Adirondacks in Upstate New York with her husband Chris, her cat, Sealips, and her dog, Sir.
Audio Essay

Emily Keeler: Contributor
Emily is a poet, essayist and travel writer with a background in literature, philosophy, religious studies and Jewish history from Northeastern University, Harvard Divinity School and the Hebrew University of Jerusalem. In addition to being Artocratic’s former Assistant Editor, she is a passionate vegetarian cook, an experimental gardener and a general dreamer looking for the next inspiration fix. Her work appears in PresenTense Magazine, JTNews: The Voice of Jewish Washington, AKitchenInBrooklyn.com, and Examiner.com.
Interview 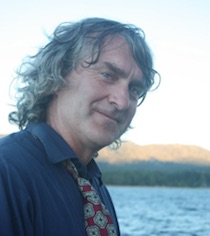 Bill Keys: Contributor
I sit with a 1917 Corona typewriter and a sign that reads, "Poems about anyone or anything". People come and make their request and I compose a poem for them.  I call this process of writing "Poeming". I've poemed near 5,000 poems over the past thirteen years. Instagram: @the_poem_guy; Twitter: @nypoemguy
Poem

Laura King: Contributor
Laura once held an endowed chair at Yale University but found it too unstable for writing. She is the author of Waking the Witch, a novel officially under review at a major publisher but more likely under the broken leg of a fired editor's desk. As she contemplates whether to re-enter the flattened literary marketplace or distribute the novel free over the Internet, she is working on several new projects, including a novel about Vietnam, a translation of the Wakefield Mystery Plays, and a collection of music videos. She lives on Vashon Island in Washington.
Essay

Matthew Lawrence: Contributor
Matthew Lawrence lives on Vashon Island, Washington with his wife and two children.  In a moment of genius, he followed his heart to the west coast in 2002 from his native land of Chicago.  Food was the main reason for his departure from Chicago and has driven his passion ever since.  Armed with a BA in Documentary Video from Columbia College Chicago, he has grown veggies, raised and slaughtered animals, made beer and wine, and attempts to put it all together just about every night for dinner.
Essay
Flash 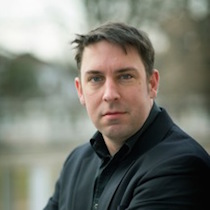 Joseph Laycock: Contributor
Joe Laycock is a professor at Texas State University, where he is free to teach courses on topics ranging from religion and film to possession and exorcism.  He also loves being able to live in his home town of Austin, TX.
Essay

Michael Nagasaka: Contributor
Born in Tokyo, raised in Vancouver, Canada and now based in Cambridge (UK), Michael Nagasaka is a 3D Animator and Director, with credits in both film (The Watchmen) and games (Silent Hill - Shattered Memories). He began his studies of classical animation at age 13 and has since then been obsessed with anything that moves through both real and imaginary spaces.
Video

Robert Pepperell: Contributor
Robert Pepperell, Ph.D, is an artist and writer. Trained at the Slade School of Art, he has exhibited widely and published many articles and books, including The Posthuman Condition (2003), The Postdigital Membrane and Screen Consciousness (2000/2006, in collaboration with Michael Punt).  He is a member of the Association for the Scientific Study of Consciousness, The British Psychological Society, a Fellow of the Royal Society of Arts, and a Reader in Fine Arts at University of Wales Institute Cardiff, UK, where he is also Head of Fine Arts.
Essay

David Sklar: David Sklar lives in Northern New Jersey with his wife, two kids, and a geriatric cat. His publications include work in Wormwood Review, Paterson Literary Review, and Space & Time, as well as the novella Shadow of the Antlered Bird. He is also coediting the conjoined anthology Trafficking in Magic/Magicking in Traffic for Drollerie Press (see the call for submissions). For more about David and his work, please visit http://davidwriting.com.
Poem
Poem

Orchid Tierney: Orchid Tierney is a New Zealand writer and poet. She graduated from the Masters of Creative Writing program at Auckland University in 2010 and currently edits Rem Magazine. Her recent work has appeared or is forthcoming in Bravado, Streetcake, Otoliths and And/Or. For more information, visit her website: www.orchidtierney.com.
Essay

Amanda Turner: Amanda Turner writes from the literary land of Boise, Idaho, where she also hosts "The Writers' Block" on Boise Community Radio. You can read more of her work at www.AmericanEgo.net.
Essay

Marc Vincenz: Contributor
Marc was born in Hong Kong of an English mother and Swiss father, and received his bachelor's degree in creative writing at Duke University in the USA. Having previously lived in China, he now resides in Iceland, where he writes for the local English-language monthly. He has several projects in the works, including a nonfiction book covering the influence of the occult in Iceland, a collection of poetry, a collection of short stories, and a novel written in Mandarin, slated for publication in China.
Poem
Poem

Gregg Williard: Contributor
Gregg Williard's stories and drawings have appeared in Wisconsin Academy Journal, Diagram, Anemone Sidecar, and Southpaw, among others. He reads his fiction on WORT community radio's "Fiction Jones" at 89.9FM in Madison, Wisconsin, where he lives and works.
Essay

Dawn Wilson: Contributor
A graduate of Bath Spa University in England, Dawn Wilson has had the pleasure to dabble in kitsch, surrealism, and espièglerie. Her work can be found in Rabbit Catastrophe Review, Gone Lawn, Paper Darts Magazine, Metazen, among others, and forthcoming from the likes of New Dead Families, The Dead Mule School of Southern Literature, and Punchnel’s while the author herself can be found dismantling the kitchen for wearable items, or at nightdawn.wordpress.com. She is at work on a madcap novel.
Short Story 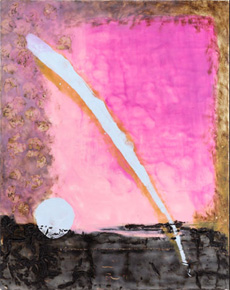