"I really think it's meant to be a kind of a wake, that people get together and celebrate this text and the ideas in it."


1 2 3 4 next
A Visit to the Land of Finnegans Wake: an Interview With Ron Hale-Evans
by Greg Dember (edited by Linda Ceriello)

Ron Hale-Evans is an author (Mind Performance Hacks), technical writer, game designer, independent scholar and one of the rare souls who has actually read James Joyce's Finnegans Wake, a book that has loomed large in his life for the last 20 years. Ron had a conversation with Artocratic editor Greg Dember, in a Seattle cafe, one recent evening.

Greg Dember: Just to get us in the right context, let me begin by saying that this interview is kind of unusual in that I'm interviewing you as an experienced reader of James Joyce's Finnegans Wake, a book which many people, like myself, admire, without having much hope of reading. I view it as a very far off, foreign land, maybe farther away than any country actually in the modern world. To me, you are an experienced traveler to this land who is back to tell us what he has seen. Can you relate to that metaphor, Ron?

Ron Hale-Evans: Yes I can relate to that. It's certainly what a lot of people think when they start out reading it, but when you read it you'll find out that it's actually not so far away – it's more like it's in your bathroom. All kinds of scatological stuff presents itself in the book. In our reading group we've found plenty of potty humor and sexual humor. It's very down to earth in many ways. Our reading group has a maxim: "A pound of penises on every page." 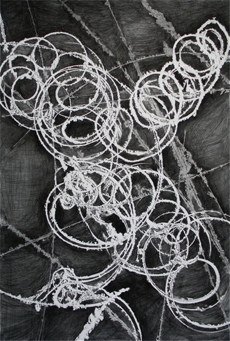 The thing that makes it seem so foreign is that it requires a lot of effort to read it. But it's not beyond most people to enjoy it, if they are willing to persevere. And I also recommend that people read it in a group. Because I really think it's meant to be a kind of a wake, that people get together and celebrate this text and the ideas in it.

G: So is it a wake for someone or something specific, either on a literal or figurative level?

R: Sure – there is a character in the book. Whether he's a character or not, I'll get back to... but let's say there is a figure in the book. His name is Humphrey Chimpden Earwicker, or HCE, as most people call him. Those initials come up all over the book: Sometimes he appears as "Here Comes Everybody".

G: How do you first meet him?

R: You know, I'm not sure. And it's not a completely sensible question, because the book is a loop. The last page loops into the first page, so you can start anywhere.

G: Really? Did you begin reading it in the middle of the physical book?

R: I dip into it frequently, but the first time I read it I started on the first page, because I didn't know yet about its circular nature. But I call it lapping it. The first word in the book is "riverrun" so it's like you're swimming.

G: So you can do laps of Finnegans Wake?

R: Right, but there's even more to it than that. Because, just like there's HCE, also there's ALP, "Anna Livia Plurabelle" who is HCE's wife, and her initials often come up LAP. So, she's a lap. And she's a river, the river Liffey in Dublin.

I guess part of what's hard to understand about it is the way things run together. So for example, HCE: most people in my reading group say he's a character. I say he's more of an archetype, and this is a debate that people who read the book have a lot.