I wish I understood Game Theory because it sounds so complicated and yet so playful. But I am the sort of person who wrote “understodd” instead and stood for about ten minutes before deciding to change it

and make it right. I like to make things right, but I don’t like to rush it too much. As for math, I love to watch eggheads write complicated formulas in chalk on blackboards. All those squiggly lines and such. It’s so hard

I woke up one morning and my disease was gone.
I had a disease for forty years and then it was gone in June.
I ran out into the street and yelled HOORAY it’s gone! and then
I went back inside and put on my clothes and then ran outside
and said HOORAY it’s gone! And everybody asked me What’s
gone? and I said The disease! It’s gone! And everybody said
You don’t have a disease! and I said Yes I do! and everybody said
Prove it! And I couldn’t and I wanted so much for it to come
back but I knew it wouldn’t no matter how hard I wished for it
and so I went into my room and waited for a birthday cake or
something that would come along naturally to celebrate the
occasion when I realized that everyone else probably still had a
disease and there was no point in waiting for a cake. Everyone has
a disease and everyone seems so bitter and sad. And so I baked a cake. 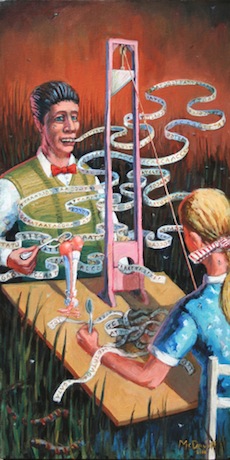 It's Good For You

I was sure that malted milk was good for you.
I am almost certain it isn’t, but I could be wrong.
In any event, one of us is wrong. Malted milk could
be good for you and I would be right, malted milk
could be bad for you and I would be wrong. Also:
malted milk might not exist, it might be one of those
things that you make up in a dream, like a girl that
comes across the room and says “A cherry danish
is what you need right now” as though she doesn’t
have a doubt in the world and the funny thing is -
you don’t either. So it could be just like that, only
where she said “danish”, just substitute “malted
milk” and add “it’s good for you” and then add
“I am your mother, I should know” and then add
“No thank you, I thought you were someone else”
and then conclude with “he walked away quickly
without turning back, hungry and thirsty.”