He liked to pretend he was watching himself. As if an older, version of himself was floating above him, usually with disapproving eyes. If Bobby ever did anything for anyone else, it was for the floating over himself Bobby. But the older version of himself was like a bad camp counselor, the one who hated his job and was mean to the kids. The kind of camp counselor who lied to kids because it was easy, taking advantage of innocence, trust and companionship. The older floating above himself Bobby was Bobby’s worst advocate, and yet his only friend. Bobby took great lengths to never speak to the image of himself floating high in the clouds, though he definitely would mutter under his breath to himself about what the older floating Bobby would say. 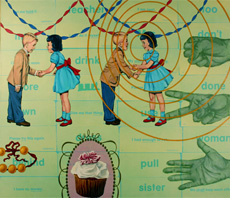 One day Bobby got caught talking to the Floating Bobby (which was like talking to himself, but better, he would later think). Bobby was off in the distance playing with his GI Joes that he had brought to school that day. There was a conflict between the two Bobbies about how to best deal with the situation of “a man down.” His Sergeant had told him to go back and get the other soldier who had been shot by a German. And Bobby had agreed. But Floating Bobby disagreed heartily. BOBBY. DON'T LET ANYONE TELL YOU WHAT TO DO. But the guy, he’s me friend; we’re on the same unit – I have to save him. LET HIM ROT IN HELL. HE'S NOT YOUR FRIEND, HE’D LEAVE YOU TO DIE IN A HEARTBEAT, NOT EVEN THINK ABOUT YOU – HE DOESN’T GIVE TWO SHITS ABOUT YOU. Well what should I tell my sergeant? TELL HIM TO GO FUCK A POTATO. Ok, but what if I get in trouble…

Bobby didn't realize he was putting on a show for the rest of the kids. He was so engrossed in the moral struggle. But when he looked up, he was mortified. He knew he was screwed for life.