O: Well, but that would have to mean – if that were possible – that babies are born at that level of consciousness already. And that is never going to happen. As long as babies are being born, we start at square one.  As long we live, as long as we are in the relative world, as long as there is this world of form, there’ll be hot and cold, light and darkness, love and hatred. Because it’s dualistic. 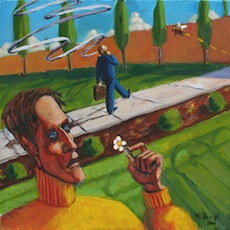 E: So no matter what spiritual height you personally reach, you will still be in the Jewish world because you accept the fact that you live in a relative, dual reality.

O: That’s right. When you have that awakening – and there are practices to get you there in Judaism and in the Chassidic tradition – when you get to the top of Mount Sinai and you receive revelation, you still have to go back down with the tablets of the law. You come back down to the relative world with that knowledge, and the world looks different at this point. It’s still relative and you still can know it, but now you know it knowing the illusion that it is, and in knowing it, you then don't have to be trapped in it anymore. You can take the hatred that people spit at your face and know that they’re in their own conditioned self. And you can hold them with compassion.

E: So does that leave you with a dilemma? – I saw you had a Barack Obama sticker on your car – Voting, trying to make change, versus accepting that maybe change is impossible?

O: Oh no, not at all. Relative change is possible.  Again, it's the distinction between the absolute and the relative. In the absolute, God never changes. In the relative, God evolves. And it is our path to support God’s evolution. God is godding, God is evolving, God is growing.

E: In the sense that everything going on around us is evolving.

O: That’s right. We should be moving toward greater awakening, greater compassion, greater opening of heart, greater awareness of the Divine in all of us. So that continues to happen. Change is possible in the relative terms. It’s not possible in the absolute terms.

O: In the absolute there’s just this. We try to name the absolute Oneness of Being as the Eternal. And we use the word "Eternal" for God. But it’s actually better to say the Timeless. Because what you’re trying to do now is use dualistic concepts to explain something that is nondual. And it’s just not gonna happen. So even the word "absolute" doesn’t capture what I’m trying not to say [Laughs].

E: Do you ever feel like you get stuck in a philosophical trap though? I mean, how do you live a day-to-day life?

O: You live with the sense that there’s so much work you need to do on yourself. To free yourself from those models of what life “is,” what life “should be.” How things should be.That causes suffering. Suffering awakens. But part of the spiritual path, for Buddhists, for sure, and also in my version of meditative Judaism,  is to realize that all of this is mind-created. And actually you have no control over it. There is a machine inside called the mind that works on its own volition, that you have no control over.

But you have identified with it because the show it’s putting on in front of your eyes is so powerful, so tantalizing. It’s got all of the emotions. It’s got tears and laughter, it’s got love and crush, it’s got betrayal and hatred, and all that is really attractive, it’s really powerful. I mean, only the most amazing movie would have all of that. Now you could never leave the theater because you would cry and then you would laugh – and that’s the movie that the mind has created in front of us, and part of the spiritual path is to realize it’s just a movie. It’s not real. It’s just a movie.

O: It’s absolutely not bleak. It’s so beautiful. It’s so gorgeous. It’s so freeing. You can just be who you are, you can be with people just as they are, you don’t need anybody to be any different than they are. You know, we always want to say, “If only my boss..." or "If only my spouse..." or "If only the president..." You don’t need to do that anymore. You can just be with what is. And accept it.

E: So give me your response:  Let’s say a big social calamity is about to happen, and all the causes that you believe are the right ones for the evolution of the relative reality are going to be turned around. How do you respond?

O: I respond by taking responsibility for myself. What you’re describing is what we are witnessing happening right now. And on the relative plane, I’m really pessimistic. But it doesn’t help me to be upset at the TV. I try to remember that if something is upsetting me on the outside, it means that I’ve got to do some work inside myself to figure out what I have yet to let go of that keeps me engaged with that part of the show.

E: And that’s a Jewish concept. I always think of the Maharal, Rabbi Judah Loew of Prague, who says that when something is bothering you on the outside it’s telling you something about yourself. Sometimes that piece of wisdom bothers me because I may just want to be mad, you know? [Laughs] I want to be mad. But I know that I’m mad because I’m supposed to be looking into myself and figuring out what I need to improve.

O: It’s what you need to "improve" in the sense that it’s what you need to free yourself of. This is what I see. What personal story are you still playing out over and over again in your life? Because if you’re getting mad, then there’s something going on in the outside that doesn’t match what your mind is telling you it should be. I’m trying to move away from should. You know? I’m trying to eliminate that word from my vocabulary. And that’s part of my spiritual practice. And it’s a powerful thing.