O: Right. And then "Adonai," the next word in the prayer, is the transcendent aspect of God. It’s the unpronounceable name, which we often simply spell out "Yud Hay Vav Hay." We call it Adonai because it’s a word that’s in place of something that is silent. This is the great silence, formless, empty. It is pure emptiness, unmanifest Being. Now Elohim, the next word, is the name of God in the plural. So it's the Oneness of Being that manifests as plurality, the One manifesting as the many, as all forms, as everything.

Therefore, what the Shema is telling you is that the transcendent aspect of the Divine is also the manifested aspect of the Divine. The form is the emptiness, the emptiness is the form. And the last two words, "Adonai Echad" mean "it is all one." That’s the nondual aspect of it. And that – in Torah – is a mantra. The Torah itself is telling us: repeat that in your head when you rise up, when you lie down, when you walk on your way, when you sit down. Teach it to your children. The Shema is a mantra we should be repeating in our heads 24/7. Well maybe not 24/7, but all waking hours.

E: Given this nonduality, what do you do with the Jewish concept of separateness, chosenness and Am Kadosh [a holy people, i.e., the Jews]? 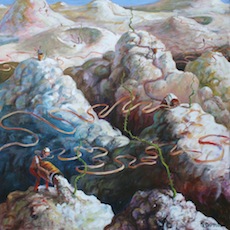 E: But what do you do with the many verses of Torah and nearly all the prayers that say God chose us from all the other peoples?

O: That’s a level of consciousness. For me, those are complex theological questions [Long pause]. The human side of this is: here’s a bunch of leaders, a bunch of rabbis, and before them a bunch of priests, who wanted to express and create a spiritual movement a couple thousand years ago. And they had to do it in a way that the audience they were targeting could hear. And could adhere to. And also that would keep them in power. So what they wrote and the way they wrote it (I may lose some friends saying what I’m saying here) was to give people the sense that if you practice this religion you’ll be among the chosen ones. They built up those prayers to comfort and to motivate. As a Jew, I can look at that and say, from my egotistical perspective: I’m part of the chosen ones. I’m really a special person. But that feeds my ego; it doesn’t feed my deepest spiritual self.

E: But it doesn’t have to mean special, as in "privileged." Like you said, chosen for Torah or chosen for a mission, or chosen to be an example, which often means being the victim, the ones put to the test.

O: Well, in my theology there is no test. There can be no test, because both the tester and the testee are the same thing. And there is something else that is happening here. Conflict arises out of ego, not out of deep spiritual Godself. You know, when we forget who we are, we forget the God inside of us, we forget the God in everybody else, then we fall into ego. We fall into the separate sense of self and that separate sense of self is a conditioned self. And that conditioned self is going to act and create conflict because it needs the world to be a specific way. And if the world doesn’t conform to the specific story I have in my mind, then I’m gonna fight it. And I’m gonna fight anyone that gets in my way of getting what I want. So at that level of reality there is conflict. Conflict arises out of forgetting.

For me that’s the definition of sin, actually. It’s a forgetting. It’s a forgetting of who we are. We’re not any more special than any other people. The spiritual path we have is linked to am kadosh, which is a path that is there to help us awaken to the holiness that we always have been. It’s a holiness that’s inherent in all there is. It’s an awakening of the divine nature of all there is. Of everything and everyone. So in that sense, all the spiritual practice in Judaism is there to help you, to help me, all of us individually, to move into awakening into the holiness that we are. To move beyond ego.  It doesn’t happen overnight, but it's a letting go of all of that keeps us separate, that keeps you as my enemy, that keeps me trying to convince you that I’m right and you’re wrong.

E: So what do you do with the fact that there is hatred toward Jews in the world? Where does that go?

O: That doesn’t go anywhere. That’s what is.

E: Everything is "all one?"

O: What you’re touching upon is the play between the absolute and the relative. In the absolute sense, everything is one. There is nothing else happening here but God – "godding." You’re not here, I’m not here, this is all God godding right now. And in that kind of awareness of that greater truth of all understanding, nobody is born and nobody is dying. Nobody kills and nobody loves. Because there is no “body.” There’s just God. So in the absolute sense, nobody hates the Jews because there are no Jews. And no body to hate them. However, in the relative sense, all of that comes into being – that being the hatred and violence. And it’s true: There are some people hating Jews just as there are Jews hating others.