ARTO: Are there not pockets of people who at least share in private what they will not share in public?

MJS: Well, yes, even during Pinochet's regime, there were people working behind the scenes to transition us to democracy – peaceful people – but my point is that, still, now that we have our freedom, most Chileans don’t know about them. Few Chileans would tell you, “Yeah, we owe our democracy to those quiet activists.” There is a film about this, A Promise To The Dead. It tells the story of a whole group of people who I didn’t even know about until I recently saw the film.

ARTO: So this was revelatory to you.

MJS: I never thought about the fact that we owed our peaceful transition to somebody. It speaks to the lack of agency that we feel, the lack of sovereignty I grew up with. Like this was not really my country, you know. It never occurred to me that there were these people who relate to it differently, like it IS their country – this whole group of silent heroes. It’s this great part of being Chilean that we don’t talk about.

My generation, those born in the 80s and 90s, are divided into two groups: those kids whose families fled the Pinochet regime, so they grew up in places like Sweden, vacationed in Greece, etc., and those who grew up in Chile. I’m from the latter group; I was raised in a very boring, restrictive dictatorship. I’m kind of envious because in my upbringing, the mentality was that you work for a corporation, you get your paycheck, and that’s life. The ones who came back from Sweden, etc., were the ones who were in the awesome bands, making cool films, and things like that. 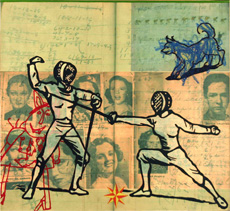 MJS: Yes, there was a nation-wide referendum. I remember that my attention was caught at that time by the ads for the anti-Pinochet campaign which were so beautiful and artfully made. This aesthetic dimension, this aliveness, reached into a part of me that had not been allowed expression, and I think it may have reached a lot of people in the same way.

ARTO: You moved to the US in 2005, to complete your graduate studies in psychology. Did you have the mindset about the Pinochet era that you have now, back then? Or is it all new to you?

MJS: As I've said, the information was new to me. People in Seattle knew more about Chilean politics than I did. People here will speak very frankly, that it’s a well known fact that the CIA took over my country. I was very confused growing up. The things my parents were saying about what was going on did not make sense to me because it was not ethically right. As a person of the Christian faith, I couldn’t be on the side of the killers.

ARTO: Did your human-rights ethic come from the values of the conservative Christian church?

MJS: Yes, but also there’s just a natural ethics. You don’t need a religion to tell you it’s not OK to kill or torture people!

ARTO: But did your parents teach you that it’s not OK to torture people?

MJS: My parents, if you asked them, would say it’s not OK to torture people. But their implicit language on the topic would be that if they are communists, yes, you should torture them. If they think differently, it’s OK to torture them. Because it’s OK to do what is necessary to defend the country from “evil.” And to my parents the Communists were “evil.”

The important thing is: You have a curious and confused kid, who doesn’t have any sources of real information to draw from because they are non-existent in her own country. There is no story told about it. There is no history written about it. It is felt, but nobody writes about it. Well, Isabelle Allende wrote about it, but Isabelle Allende would get dismissed as a "Communist" because she is the niece of Salvador Allende. Her account of the events of 1973, written in House of Spirits actually corresponds very well with the recently-released CIA reports.