My two friends ("J" and "S") and I had five days to drive a car we picked up in Georgia back home to Seattle. We allowed ourselves one recreational detour on our road trip: New Orleans – we three 20-something males from the Northwest wanted to find out what Bourbon street was all about.

We arrived there as evening fell to find that the friend we'd thought was going to put us up for the night had left town, and we would need to spend some of our very little cash on a hotel room. 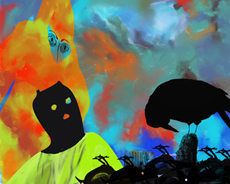 Anxious but still determined to make the most of our meager funds, we eventually found ourselves at a very friendly bar called Oz, where the DJ was announcing a midnight dance contest, and the prize – $100 cash. S and I, both moderately roundish and not terribly light on our feet, thought nothing of it, but J, who had been a theater and dance major in college, jokingly expressed interest. A collective light bulb went off between us. We looked around and realized there were only about a dozen people in the bar. Only now did we also notice none of those people were female. S and I are straight, and in the midst of our realization that this was not the sort of bar that we normally frequented, we turned to J who was easily at the moment the most handsome man in the bar AND of the appropriate sexual orientation.

"Dude, all kidding aside, you could win this."

Stepping outside for a few minutes, after some heavy persuasion, we'd hatched a plan to pimp out our friend. Back at the bar, the crowd had grown and J had another moment of hesitation. But we pumped him up, Rocky style, and he signed up. All three of us were expecting a quick and easy $100: prize money for J, beer money for all of us, and gas for the road.

The MC took the stage, wearing a blouse and khakis, plenty of jewelry and eyeliner, and strutting to the end of the catwalk in step to a disco remix of "Somewhere Over the Rainbow." As the crowd increased, both in numbers and in stylishness, S and I looked down at our road trip stained t-shirts and running shoes, and hastily moved to a private corner away from the action, where we focused on planning how much of the prize money we could afford to spend partying on our one night in the Big Easy.  But we soon realized J's good looks were no match for the beefcake professional strippers who poured in just before the entry deadline.

Before the actual dance portion of the contest commenced, our poor friend was compelled, along with the other contestants, to perform a number of rather demeaning tasks--such things as reciting his autobiography, doing push-ups, and answering a series of very invasive personal questions. With each round of tasks, the contestants were required to take off another article of clothing, getting closer and closer to their birthday suits while the crowd went wild. S and I, awkward and sheepish, hunkered down in our little isolated corner of the bar.

After two hours on stage, J was completely sober, any liquid confidence he'd had now gone. When the results were eventually announced, we welcomed defeat so we could call an end to the evening and go get some sleep at the hotel that we could not afford. J did not win the dance contest. However, during the open dance phase, he did win more tips than anyone else. Our brave friend barely had those dollar bills pocketed in his half-pulled-on pants as S and I pushed him toward the door. But J, who is normally the most easy-going person I know, was adamant:

"I was on that stage for two fucking hours. I nearly froze my nipples off and we haven't had any fun yet tonight. You are buying me a DRINK and we are hanging OUT."

We had a round of drinks, trying with limited success to put our party hats back on,  then trudged down the now-lonely-and-desolate Bourbon Street, back to our stupid hotel.   We got up early the next morning and packed up, hoping to forget the whole ordeal. With a little time to kill on our way out of town, we decided to go in the Horseshoe Casino. I placed my ritual bet on Red-3 on the roulette wheel, which I always lose. It landed right on my number! We walked out the door with $180 and smiles of redemption.